Comment on Why Do Lithium Batteries Go Bad? by Grepow 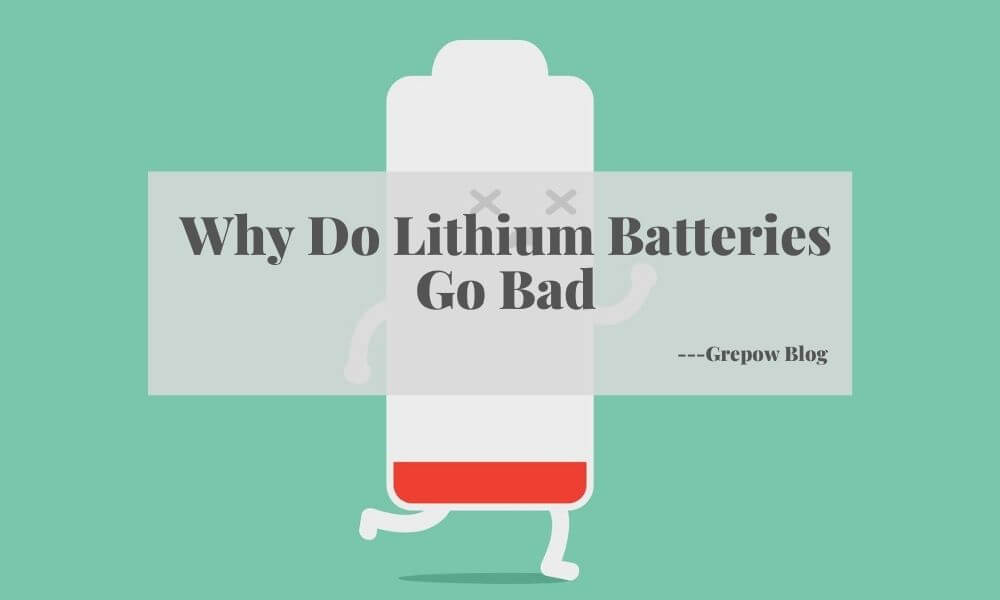 This is a general and most asked question in the globe. We usually purchase lithium batteries and expect them to last for the desired period. The estimated life of lithium batteries is about two to three years of about 300 to about 500 charge cycles. But sometimes, this might not be the circumstance the lithium batteries might go bad after a short period. But you cannot tell what might have caused the sudden death of the batteries.

You might be the one causing the inevitable death of your lithium batteries. Our activities and how we handle the batteries can make the batteries last for a short period. Therefore, you need to learn what might be causing the reduced lifespan of the battery. This article will cover the causes of battery death, checking the battery, and making it new.

Therefore, you must be keen to what is being discussed here. This will save you money and troubles caused by death batteries. Get each detail and get assured you can enjoy having an excellent working lithium battery.

What Causes Lithium Battery To Die?

During the process of charge, lithium gravitates to the negative electrode, hence changing the battery’s voltage potential. Removal of the lithium during discharging does not reset the battery completely. A mesh that consists of lithium atoms forms on the anode’s surface called a stable electrolyte interface (SEI).

The SEI layer consists of lithium oxide and lithium carbonate, and they grow as the battery cycles. This mesh gets thicker and eventually causes a blockage that obstructs interaction with the graphite. The longer that battery stays in this state, the worse the degradation gets.

This deposition of metallic lithium at the anode leads to a reduction in free lithium ions hence irreversible loss of the battery’s capacity. This then causes short-circuiting between the cathodes. Lithium plating also causes a low-temperature operation.

Under-voltage can also lead to the death of your battery. Allowing the battery’s voltage to fall below 2 volts will kill your battery. The under-voltage leads to the dissolve of the copper anode to the electrolyte. This then raises the battery’s self-discharge rate, but as the voltage is increased above 2 volts, the copper ions are dispersed all over the electrolyte. The dispersed copper ions are precipitated to metallic copper. This can lead to short-circuiting between the negative electrodes.

Low temperatures also reduce the rate of chemical reaction, hence slowing lithium ions’ insertion into the intercalation space. Hence there is reduced power and lithium plating of the anode with a capacity loss.

High temperatures bring a different set of issues that leads to complete damage to the battery. The reaction rate is increased hence higher currents that give rise to higher I2R heat dissipation, thus even higher temperatures.

Batteries become as weak as they age. Thus this causes the batteries to die because they have undergone many recharge cycles. The plates are covered with mesh-like chemicals as time goes. This will then lead to permanent damage to the lithium battery.

The negative electrodes of the lithium cells expand and contract when they are being charged or discharged. This is due to the effect of the intercalation of lithium ions in and out of the crystal electrode structure.

The electrodes’ stress leads to the particles’ crack, leading to increased internal impedance as the cells ages or break down the anode. This can lead to overheating, then finally, battery failure.

How Do You Know If Your Lithium Battery Goes Bad?

When the rechargeable lithium-ion stops charging, then that is one sign that your battery is dead. Healthy batteries should usually charge and hold for a specified period. If your battery loses charge immediately, the charger is withdrawn, then the battery has gone wrong. Losing the charge holding potential is a direct sign.

If during recharging, the battery becomes very hot, then there are some defects in the battery. The battery that overheats does not last for an extended period. Also, if the battery charges slowly, then you should consider that as a dying battery. There is a recommended time that a battery should take to be fully charged.

Also, if the appliance you are using discharges the battery in a shorter period than it used to when the battery was new, then the battery is in the process of dying. For instance, if the battery used to last for 5 hours but currently lasts for 30 minutes, then that battery has gone wrong.

How Do You Rejuvenate Lithium Batteries?

These are the steps to follow to revive your battery:

Check the voltage – unplug the battery from the appliance and measure the voltage using a voltmeter.

Connect to a healthy battery – take a properly working battery with the same rating as the dead battery. Connect the two batteries using crocodile clips. Connect the positive to the negative to create a working circuit. Leave them connected for 10-15 mins.

Recheck the voltage – take another reading of your dead battery. At this stage, the battery will be having a more significant voltage capable of accepting the charge.

Charging and discharging the battery – plug your battery now into a charger and let it become fully charged. After that, discharge the battery.

Freeze the battery – seal the battery in an airtight plastic bag and freeze it for 24 hours. Ensure no moisture inside the bag that can damage the battery. Then take the battery out of the freezer and place it at room temperature for 8 hours.

Charge the battery – place the battery in the lithium battery charger and ensure it is fully charged. This restores the condition of your battery. （Article Cited: large.net）

More about battery knowledges, pay more attention to Grepow Blog, if you have any question, please feel free to email us: [email protected]